I had my first encounter with love when I was eighteen. Until then I’d been a skeptic—having watched my friends navigate their short-lived relationships with no desire to venture into one myself, I remained blissfully unaware of passion’s command. When I finally was cast into my own romantic interlude, I suddenly lost all the grounding and rationality that had always defined me. I willed myself to snap out of it, but no matter how I tried to reason, I succumbed again and again to my newfound emotional vulnerability and desire. I’d always placed my mind above my heart, but now, finding that logic had failed me, I was at the mercy of my feelings.

The fact that I can find countless other victims of love, both in real life and in literature, gives me some comfort. In Sophocles’ play Antigone, love manifests itself as a dominating force. Antigone, faced with the option of either burying her brother Polynices against King Creon’s decree or defying the gods by letting his body rot unburied, accepts her death as a consequence of choosing the former. As she is led to her “bridal vault,” where she will figuratively become the bride of Hades, the chorus delivers an ode on the power of love, which is portrayed as a supreme force from whose control “not even the deathless gods can flee…/nothing human born for a day—/whoever feels your grip is driven mad” (884-886). The implication that “not even the deathless gods” are exempt from love’s jurisdiction suggests that Antigone, a mere mortal, cannot possibly escape its control, and thus her will is powerless to oppose her passions. 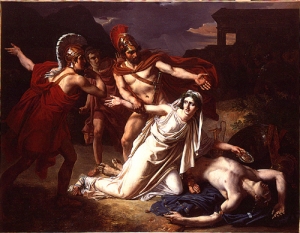 Rather than using free will to make our decisions, it’s more likely that our passions choose first and we follow by corroborating passion’s choice with reason, resulting in the illusion of free will. In Antigone’s case, she professes that her determination to bury Polynices is validated by her loyalty to the traditional order of gods and her feminine responsibility to carry out burial rites for dead kin. However, her speech betrays an emotional, possibly erotic, attachment to Polynices that seems to steer her actions more than her logic does. Early on in the play, after failing to secure her sister Ismene’s help, Antigone defiantly declares, “I will bury him myself./ And even if I die in the act, that death will be a glory./ I will lie with the one I love and loved by him—/ an outrage sacred to the gods!” (87-88). The fervor in Antigone’s speech is rooted in her devotion to Polynices, whom she refers to as “the one I love,” and the fact that burying the corpse would be simultaneously “an outrage” to Creon while “sacred to the gods” whom Antigone champions is tacked on almost as a logical afterthought to qualify her emotional distress.

Because Antigone is unable to will herself out of love, which initially drives her decision to bury Polynices, she reasons her way into the decision instead using familial and religious obligation. In this way, Antigone demonstrates how reason can be employed to adopt a goal that passion has already set, thus creating the false impression that the decision was made through one’s free will. It’s easy to think we are making a choice through free will when our passions align with what our logic recommends, allowing us to completely justify our decisions. But when we consider that passion can only tend toward one outcome, it rules out the possibility of free will because, having known what we wanted from the start, we did not actually make a choice among alternatives.

The chorus from Antigone pronounces, “Irresistible Aphrodite, never conquered—/ Love, you mock us for your sport,” meaning at the hands of love, human judgment is merely a puppet to be toyed with because it poses no real threat to love’s supremacy (893-894). When in reality Antigone is manipulated by love, she tells herself that she is acting out of righteousness and reason, and in this sense Antigone greatly resembles Francesca da Rimini from Canto 5 of Dante’s Inferno, who also first succumbs to passion and later finds ways to use reason to dilute her culpability. Francesca further illustrates how erotic love can guide our decisions by preceding logic. In Canto 5, she relates to the pilgrim how she committed the sin of adultery and ended up in hell, describing her downfall as follows:

We were reading one day, for pleasure, of

Lancelot, how Love beset him; we were alone and

Many times that reading drove our eyes

together and turned our faces pale; but one point

alone was the one that overpowered us.

When we read that the yearned-for smile was

kissed by so great a lover, he, who will never be

kissed my mouth all trembling. Galeotto was the

book and he who wrote it: that day we read there no

From Francesca’s diction, for example that they were “overpowered,” “pale,” and “trembling,” it’s evident that she and her lover, Paolo Maletesta, were under the influence of passion. Despite this, however, when she recounts the course of events from a later perspective, she makes every effort to logically displace her own guilt. Francesca portrays the book as a manipulative agent while strategically rendering herself and Paolo passive entities. According to Francesca, they were “without any suspicion;” it was the reading that “drove [their] eyes together and turned [their] faces pale” and reading about the kiss that “overpowered” them. She blames the book, saying “Galeotto was the book and he who wrote it.” Francesca embodies how, having already acted on their passions, people reason as an afterthought, either to substantiate a decision made by emotion as Antigone did, or to justify their actions by claiming innocence and admitting to a lack of will involved, as in Francesca’s case. Regardless of which category the delayed invocation of logic falls under, there is no room for the exercise of free will because passion has already claimed a head start and decided on a course of action. 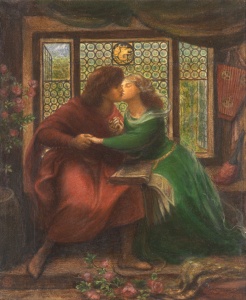 Aside from implying that she was possessed by love, which determined her actions, it has also been noted that Francesca “speaks as a lady in a romance, to mitigate her culpability” (Freccero, S20). In “The Portrait of Francesca,” John Freccero defines “courtly love” as one that “demands the total devotion of the lover, with no claim to reward except for the gracious condescension of his lady,” and he articulates how Francesca speaks of her affair as if Paolo had courted her, so as to reduce her own liability (S19). We find evidence of Freccero’s claim in Francesca’s insistence that “Love, which pardons no one loved from loving in return, seized me for his beauty so strongly…” (103-104). Francesca reasons that because she was loved, she had no choice but to “[love] in return.” Like Antigone, however, Francesca only calls upon reason to justify her affair after she has already succumbed to passion and is now suffering its consequences in hell.

Francesca’s need to defend herself, even after her adultery has become irrevocable, reflects a sense of pride that explains why humans are so desperate to believe in free will. Because it is our ability to think rationally that sets us apart from animals, we tell ourselves that our use of reason allows us to think objectively and make informed choices. Reason alone, however, does not equate to freedom of will, simply because it can never be completely isolated from emotion. As long as we possess any type of feeling whatsoever, whether it’s sympathy, guilt, or passion, we will always have a preference for one outcome that pushes our logic in that same direction. In “The End of (Discussing) Free Will” from the Chronicle Review, Vanderbilt University professor Owen D. Jones challenges those who insist upon free will to “just try willing yourself out of love, lust, anger, or jealousy.” We can’t run away from our emotions; at best we can only hope that our reason agrees with our passion, and that illusion of free will is the closest we will get to any authentic exercise of free will. So rather than continuing to deceive ourselves of the will’s autonomy, we should accept the underlying influence of passion and learn to see it not as a sign of weakness but as a natural condition of being human. Then we might actually be able to make peace with the fact that we are not as free as we believe.