I wish I could report that the time when I grabbed my sister’s brand new golf club and whacked her on the head was not my fault. However, that would be untruthful. Sometimes I try to blame it on the fact that I was young and did not know right from wrong, or that I was the middle child who wanted more attention. When my parents reprimanded me, I explained, “It was my (imaginary) evil twin. She made me do it.” But, the truth is, I was the only one at fault. No one forced me to hit my sister. I made that choice on my own out of jealousy. I acted freely. Though some people believe that nerve cells in our brains are responsible for dictating our choices before we are aware of them, we are in control of our decisions and actions. This power we hold over ourselves is free will.

What is free will? Free will is a complex idea. It is more than being able to make our own decisions. Free will is the ability of an agent to

make a reasoned choice among various alternatives, and act on [that] decision (Bok).

Further, this choice and our following actions must be accomplished free from external coercion. The last component of free will (acting on a decision) is more specifically referred to as agency. Agency allows an agent to control his/her behavior to reach a specific goal.

Upon a superficial reading of Antigone one could conclude that the playwright expresses a determinist understanding of human existence, as it seems that fate is ultimately responsible for the ending tragedies. By introducing the idea of fate, Sophocles implies that the characters cannot be held fully accountable for their actions. However, Sophocles complicates the “first reading” in so many ways, as Antigone is able to make free choices along the way. In Sophocles’ Antigone, Antigone shows that it is possible to make a calculated decision when given multiple alternatives, and to act on that choice voluntarily, therefore supporting the existence of both free will and agency.

While Antigone (right) decides to bury her brother, Ismene (left) will not disobey Creon’s edict and reminds Antigone of the severe consequences of her actions. (Source: http://lecture-spectacle.blogspot.com)

When crisis arises in Thebes, Antigone is aware that she has two different options from which to choose. Put simply, she can either bury Polynices or she can leave him unburied. To complicate matters, these choices have serious consequences. If Antigone leaves her brother unburied, he will suffer eternally in between the world of the living and the world of the dead. If Antigone disobeys Creon’s edict and buries Polynices, she will be punished with death. When Antigone discusses her plan with her sister, Ismene reminds Antigone of the consequences of her actions. Ismene asks, “You’d bury him – when a law forbids the city?” to which Antigone eagerly responds, “Yes!” He is my brother and – deny as you will – your brother too. No one will ever convict me for a traitor” (Line 53-57). Antigone’s decision hinges on her interpretation of the word “traitor.” She believes being unfaithful to her brother would make her a traitor, while being disloyal to her city would not. Antigone is well aware of the consequences of her actions and in choosing to bury her brother, Antigone also makes a statement of sorts: that she alone will control her fate.

With two legitimate options, the first criterion for having free will is met and now I will show that her decision is well informed. Antigone articulates her choice in such a way so as to justify it. She appeals to her sister and fellow citizens on several occasions, seeking convince them of the justice of her actions. She prefers an honorable death to a life as a traitor. Antigone states,

I will bury him myself. And even if I die in the act, that death will be a glory. I will lie with the one I love and loved by him- an outrage sacred to the gods! I have longer to please the dead than please the living here: in the kingdom down below I’ll lie forever (Line 85-90).

There is no doubt in Antigone’s mind when she dictates her plan, as she has many reasons for her choice. Firstly, she must give her brother a proper burial so that he can rest peacefully in the world of the dead. Antigone would not do this for just anyone.

If I had been the mother of children or if my husband died…I’d never have taken this ordeal upon myself, never defied our people’s will. What law, you ask, do I satisfy with what I say? A husband dead, there might have been another. A child by another too, if I had lost the first. But mother and father both lost in the halls of Death, no brother could ever spring to light again (Line 995-1004).

She explains to Thebes that since her parents’ deaths, her brother is irreplaceable and so she must honor him. Secondly, Antigone does not believe that she will defy either the gods or justice by burying Polynices. She will only defy Creon’s edict, an edict she views as unjust. In this case, Antigone does not feel that she will betray her city, because she has the right to disobey the law if the law is unjust. Lastly, given her two options, Antigone would rather die a glorious death that the entire city admires than experience the guilt that would accompany betraying her brother. Antigone takes ownership of her choice by justifying it to the citizens of Thebes. She wants others to recognize and accept the integrity of her choice. By making her own rational decision, Antigone meets the second criterion for free will.

Antigone demonstrates agency by burying her brother, thus fulfilling the third criterion necessary to achieve free will. Who is an agent? An agent is someone who consciously controls his/her own behavior, someone who is responsible for his/her own destiny. Antigone, capable of action, is an agent simply because she acts. Upon learning that Polynices’ body is buried, it is clear that Antigone acted voluntarily because she does not regret her decision at all. When confronted with the accusation, Antigone confirms on a guilty conscience, “I did it. I don’t deny a thing” (Line 492). She displays pride rather than remorse. In fact, she embraces the blame, or rather the glory. Here, Antigone’s agency takes on another dimension, as we learn that she carried out a goal directed action. First, the reader thinks her goal is honoring her brother. However, it becomes clear to the reader that Antigone’s actions are influenced by an ulterior motive: the promise of pride and glory. Antigone asks,

What greater glory could I win than to give my own brother decent burial? (Line 561-562).

Antigone reveals she is not acting solely for her brother; she has selfish goals in mind as well. And so, Antigone absolves Ismene of any responsibility for something in which she had no part. She doesn’t want to share the glory. Selfishly, Antigone chooses her sister’s fate as well as her own. She snaps at Ismene, “You chose to live, I chose to die” (Line 626). Antigone admits that she controlled her fate. Antigone chose her fate and she would make the same choice again. This is free will.

Some scholars point to Antigone as an example of our lack of free will, because Antigone believes her destiny is preordained by the gods. Thus, she adheres to the doctrine of determinism (or possibly predeterminism). After watching her entire family be condemned to misfortune, Antigone has no hope for a better future and does not believe that she has the power to choose her course of life. Antigone, however, did choose her path. She chose death. This was a rational decision that was not forced upon her, and so she exhibited free will. When Antigone says, “I chose death,” though she is contradicting her belief, she is correct in revealing that she did choose her fate. Some may argue that her decision was coerced, as Antigone is controlled by the fact that she must honor her brother. While this could have held some truth, Antigone’s agency invalidates the theory. The story is complicated by the fact that Antigone expresses desire for glory and for a hero’s death. Antigone’s desire for a glorious death leads her to choose her destiny. 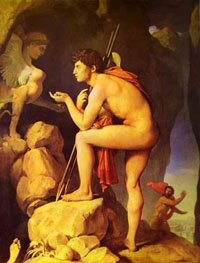 Although Oedipus unknowingly decided his fate, he is still responsible for his actions. (Source: http://www.ancient greece.com)

It is interesting that Sophocles emphasizes Antigone’s agency to such a degree, while in Oedipus Rex, Oedipus himself seems to have no power to avoid his fate. Again, the playwright initially appears to have a determinist outlook on human existence. By blaming fate for the tragedy, Sophocles is taking responsibility away from Oedipus. Is Sophocles contradicting himself? Although, in Oedipus, Sophocles expresses that our fate is inevitable, Oedipus still makes decisions along the way that lead to his fate. When Oedipus was a child, he was told that he would eventually murder his father and sleep with his mother. To prevent this prophecy from becoming reality, Oedipus must avoid murder. He should not have killed the men at the crossroad even if he had no idea one was his father. In a flashback, Oedipus recounts the story honestly: “I strike him in anger! – and the old man…I paid him back in interest!…I killed them all – every mother’s son!” (Line 891-898). Oedipus was an agent who controlled his own behavior. No one forced him to kill anyone; Oedipus made that choice of his own accord – he exhibited free will.

Later in life, Oedipus unknowingly marries his mother. It seems unfair to blame Oedipus when he was unaware, however, he still acted freely and is responsible for his actions. When Oedipus discovers the truth he says, “I stand revealed at last – cursed in my birth, cursed in marriage, cursed in the lives I cut down with these hands!” (Line 1308-1310). While fate may exist, Oedipus knows that he willingly made choices and admits that his actions led to his destiny. Knowing his prophecy, Oedipus could have gone through his life without killing or marrying anyone and the prophecy would have remained unfulfilled. If he had made different decisions, Oedipus would have, in fact, had the power to avoid his fate. Thus, Sophocles is consistent in his belief that agency and free will exist, and seems to be among those who, like me, believe that determinism is compatible with free will.

Free will is a special gift with which all human beings are born. Though, at times, we may be influenced by external pressures, we are the ones who make our final choices and, in so doing, decide our individual fates. It is both empowering and exciting to have this control, but we must choose and act wisely as we are, ultimately, the authors of our own destiny.