According to modern philosopher Hilary Bok, “A person whose actions depend on her choices has alternatives; if she is, in addition, capable of stepping back from her existing motivations and habits and making a reasoned decision among them, then […] she is free.” Free will is the ability to use reason and good judgment to make a decision from among her alternatives. Seeing alternatives, however, is difficult for those who are inattentive to the nuances of their situation. In Antigone, Sophocles shows how prejudice and passion impair the use of good judgment by blocking Creon and Antigone from seeing the avenues toward a peaceful resolution to their dispute. Their tragic fates are often mistaken as the result of a clash of irreconcilable ideologies, but Haemon’s reasonable voice suggests that there is a way to compromise in even the most antagonistic of situations. How, then, can we recognize our alternatives in order to judge the best course of action and thus exercise free will? 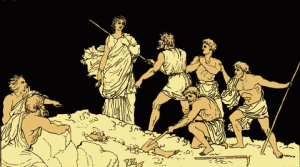 Antigone and the body of Polynices

Free will is the ability “of rational agents to choose a course of action from among various alternatives.” The power to choose our course of action relies on our capacity for judgment. It is good judgment that leads one to choosing the most reasonable course of action in pursuit of the best possible outcome. In his Discourse on Method, Descartes discusses judgment’s role as the leader of the will:

For, given that our will tends not to pursue or flee anything unless our understanding represents it to the will as either good or bad, it suffices to judge well in order to do well, and to judge as best one can, in order also to do one’s very best, that is to say, to acquire all the virtues and in general all the other goods that one could acquire, and, when one is certain that this is the case, one could not fail to be contented (16).

Note that in Descartes’ view, the will is not the acting agent – it merely follows what judgment deems to be the best course of action. “To do one’s very best” is the direct result of “judg[ing] as best one can.” Thus, if one can apply reason to identify the “good” from the “bad” – if one can judge wisely – then Descartes posits that one can “acquire all the virtues” and live a good and happy life. While judgment is the premise of will to action, it is important to note that making choices first requires a set of alternatives from which to choose.

To recognize alternate courses of action, we must fully observe the situation by “stepping back from […] existing motivations and habits” (Bok). Following Descartes’ discussion of acquiring virtues, Simone Weil suggests that the virtues of life can be attained through strict focus and conscious meditation.  In Gravity and Grace, she claims, “the authentic and pure values – truth, beauty and goodness – in the activity of a human being are the result of one and the same act, a certain application of full attention to the object” (108). The act of giving an object “full attention” involves discovering facets of the object that were never seen before. Such a method of careful observation is used to discover alternatives in a situation. In uncovering options we create the opportunity to exercise judgment. But Weil warns “not to try to interpret” the subject while observing it, because interpretation may be conditioned by social influences that may confine and narrow our understanding of the subject. Ultimately, it is a lack of complete understanding that prevents us from identifying all of our alternatives in a situation.

The character Creon from Sophocles’ play, Antigone, acts without full consideration of his situation, and fails to recognize his opportunity to avoid catastrophe. His son, Haemon, tries to reason with him to reverse Antigone’s death sentence with appeals to logos by claiming that public opinion opposes the sentence. However, Creon ignores reason and hastily decides that Haemon is fighting on “the woman’s side”. He fails to consider the situation from Haemon’s and the citizens’ point of view and falsely concludes that Haemon has turned against him. Additionally, Creon is encouraged by a patriarchal standard to rule over his son, and automatically discredits his reasoning as immature. He retorts viciously, “So, men our age, we’re to be lectured, are we? – schooled by a boy his age?” (96). No matter how sound or eloquent Haemon’s argument is, Creon is impermeable to reason because of paranoia of losing power over the state, and his self-conviction that killing Antigone is the only method of preserving and strengthening his position of power. The argument in this scene demonstrates that it is not the clash of irreconcilable ideologies that leads to a tragic end, but instead the inability to carefully consider the wisdom from others. Creon failed to follow Weil and Descartes’ method of careful deliberation and good judgment before action; perhaps if Creon were given space and time, he would have been more rational in his decisions.

It is important to note that as a leader, Creon’s decisions are placed on a pedestal, and that his decisions were always made rashly and in the presence of an audience. This is a recipe for disaster, since Weil believes that it is in solitude that we are better able to focus our observations:

Solitude. Where does it’s value lie? For in solitude we are in the presence of mere matter (even the sky, the stars, the moon, trees in blossom), things of less value (perhaps) than a human spirit. Its value lies in the greater possibility of attention. If we could be attentive to the same degree in the presence of a human being… (110)

Being around others when making decisions is distracting. Other people may disrupt our attention by introducing bias and their presence may pressure us to make irrational decisions. In solitude, we are free of pressure to conform to rules or social norms, and thus free to arrive at our own conclusions following reason. Descartes warns against following the actions of others, and claims that the social customs we may feel pressured to follow can be full of faults. He reflects, “I learned not to believe anything too firmly of which I had been persuaded only by example and custom; and thus I little by little freed myself from many errors that can darken our natural light and render us less able to listen to reason” (6). Descartes was thus able to liberate himself and to construct a realm of freethinking by deriving truths from observation, and not from “example and custom”.  Removed from the noisiness of the world, an individual has the freedom to observe the situation without pressure to arrive at a premature conclusion, and without fear for his social standing. Beyond the reach of the pressure that comes from being surrounded with his subjects Creon may have heard the voice of reason in his son and realize that killing Antigone would ruin his relationship with the city and with his son. However, Creon is not the only one at fault – Antigone, too displays a lack of good judgment, as she blindly follows desire without thought and control.

Emotion such as desire may impair the use of judgment if we allow it to control our thoughts.  Love is often portrayed to be inescapable and able to control the thoughts and actions of people. In Antigone, love is blamed as an agent that enraptures Antigone and sends her to doom. Before Antigone descends to her death chamber, the chorus cries, ““Love! – / you wrench the minds of the righteous into outrage, / swerve them to their ruin – you have ignited this, / this kindred strife, father and son at war / and Love alone the victor – ”(101). Love is personified as force that drives even “the minds of the righteous into outrage.” Antigone is righteous in providing a proper burial for her dead brother, but her love and obsession with death make her deaf to her sister’s pleas, and unwaveringly hostile to Creon. From the opening scene Antigone expresses her wish to die, and it appears that her motives were incited by a lust for death. Her procession down the steps into the ground is similar to a wedding ceremony, and constant references to marriage suggest that Antigone truly is proceeding to “go wed the lord of the dark waters” (102). Antigone wantonly submits herself to lust and at the same time forfeits her ability to reason and judge well. Weil claims that the desire to surrender to passion must be suppressed in one’s self in order to fully realize one’s free will. Weil argues, “We have to endure the biting of desire passively, as we do a suffering which brings home to us our wretchedness, and we have to keep our attention turned towards the good” (109). We are tempted to surrender ourselves to desire, which feels inescapable, but can actually be endured by ignoring its presence. Desire is merely a distractor that drives us away from the “good”, and can lead us astray in our actions, as it did to Antigone. It hinders our ability to understand and rationalize, thus disabling us from seeing choices and judging with clarity and reason.

If free will is defined as the ability to use reason and good judgment to decide a course of action, then it is an ability that we have but cannot easily exercise. We must apply our full attention in observing a situation to identify decision points. Sometimes that focus can only be attained in solitude, and after gaining control of desires. Only then are we free to exercise our power to reason and choose.